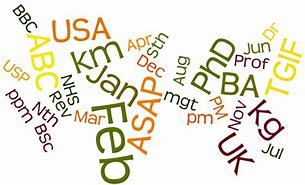 Mrs. – Stands for Mistress, the opposite of Master, which is what a married woman would be called. In some American language traditions, the R is pronounced: Mizrez.

oz. – Ounce. Originated with the Roman Latin word uncia. In Italian the word became onza and shortened to Oz.